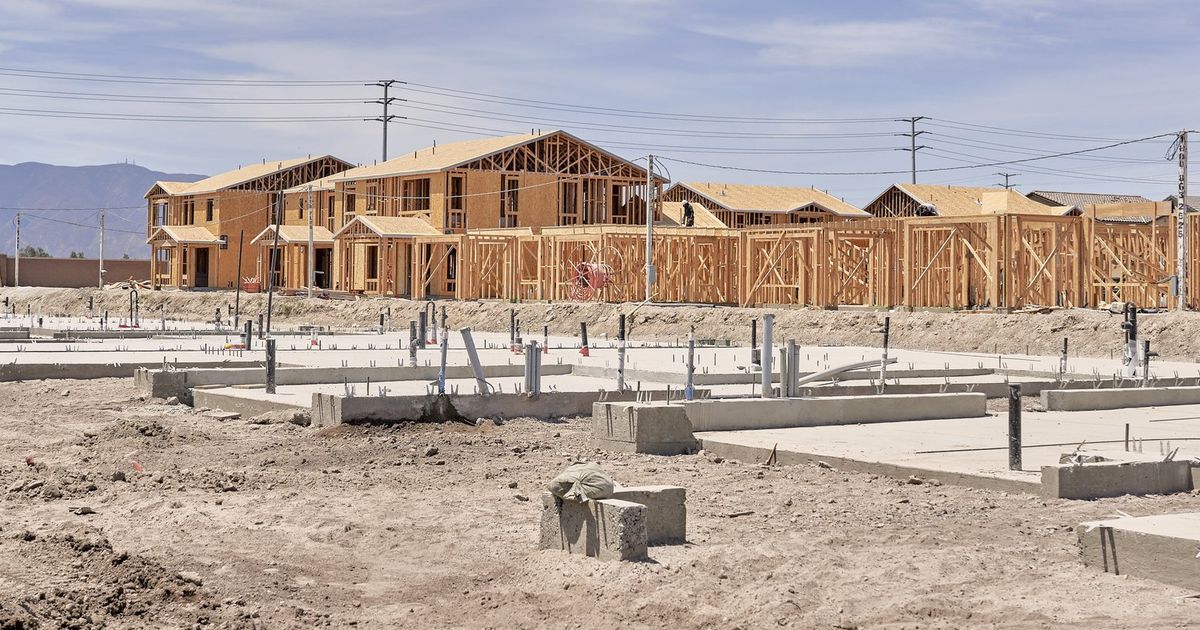 The United States has a deep, decades-old housing shortage. Also, at the moment, homebuilders across the country are pulling back on development because they cannot sell enough homes.

How can both of these things be true? That riddle is at the heart of the boom-bust nature of housing, where an excess of regulation and the mixed incentives of the market mean there is never a supply that lines up with demand. One way or the other, solving it will require more building during downturns, and, most likely, some sort of public program to subsidize it.

Consider what the past few months have visited on Hayden Homes, a regional homebuilder based in Redmond, Oregon, that builds about 2,000 houses a year throughout the Pacific Northwest. At the beginning of the year, Hayden’s biggest problem, shared by almost every other U.S. homebuilder, was figuring out how to supply enough houses for everyone who wanted one. The company could not find enough land, workers were scarce, lumber prices were exploding, and the faltering supply chain turned the search for everything from dishwashers to garage doors into a kind of corporate scavenger hunt.

The one thing builders were not short on was qualified buyers, who were in abundance because of low interest rates, high household savings and the sudden ability for millions of workers to set up home offices wherever they wanted. To deal with the crush of demand, builders like Hayden began choosing buyers from waiting lists or conducting elaborate lotteries to pick a “winner” from the crowd.

Now, in the space of a few weeks, the situation for Hayden, and the housing market, has reversed. Interest rates on the average 30-year mortgage have jumped to about 5.5%, from about 3% at the start of the year. That has added hundreds of dollars a month to the typical house payment and disqualified many buyers. At the same time, a broader slowdown in home sales and price gains have caused many would-be purchasers to pull back for fear of buying at the market’s peak.

Following a steep decline in sales for June, and after watching its waiting lists dissipate, Hayden is rejiggering its inventory to emphasize smaller, cheaper dwellings, and ratcheting back the number of already-built “spec homes” it produces. All of this is happening even though the ranks of prospective buyers are still broadly employed, still sitting on a down payment and still dreaming of a new home.

“We would rather forgo a few sales in the future than be stuck with homes we are unable to sell now,” said Deborah Flagan, a vice president at Hayden.

The problem facing Hayden and other builders is simple: Sales of new homes are falling — down 15% this spring from a year earlier — at the same time that a wave of homes, begun before the jump in interest rates, are hitting the market. The number of homes that have been completed but not yet sold hit a 15-month high in May. Redfin, the real estate brokerage, recently reported that buyers were trying to back out of sales agreements at the fastest pace since the early weeks of the pandemic.

“Demand has slowed enough that builders are finding themselves with homes and no buyers for them,” said Ali Wolf, chief economist at Zonda, a housing data and consulting firm. “That is a problem we haven’t faced in years.”

Developers are responding the way Economics 101 says they should: by cutting prices on the houses they have already built, and by pulling the plug on virtually any project that was not already too far along to be abandoned. Builders started construction on about 93,000 single-family homes in June, down 16% from a year earlier.

“Very smartly, builders are saying, ‘Hey, let’s rein it in,’” said Rick Palacios Jr., director of research for John Burns Real Estate Consulting. “Yes, we are undersupplied from a structural standpoint, but when rates roughly double in the space of three or four months, builders don’t care. They are planning their business for the now.”

If the slowdown continues for more than a few months, as many economists predict, the next step will be to cut back on future land development. The likely effect of this would be that when housing gets going again, builders will remain behind. So families will once again be clamoring for homes, getting one will once again depend on winning a lottery — and the housing shortage will continue to crush family finances and make it harder to build wealth. “This is going to have a significant impact on future supply,” said Randall Lewis, a principal at the family-owned Lewis Group of Companies, a developer of master planned communities in California and Nevada. Lewis’ company takes raw land and over the course of decades adds basic infrastructure like sewers, streets and traffic signals. When companies like his pull back, the number of lots homebuilders can use in the future declines.

“We are now saying we’re going to look project by project and say which ones are we are going to go ahead on and which we are going to take a pause on,” he said. “As a developer, the question is, how much money do you want to put in the dirt when you don’t know what the future is going to hold.”

That is a problem, because while the challenge for builders, in the short term, might be that they have too many homes and not enough buyers, the challenge for the country, in the long term, remains precisely the opposite: There are not enough houses for all the people who want them.

Last year, Freddie Mac estimated the nation’s housing supply deficit at 3.8 million units, up from 2.5 million in 2018. Other analysts come up with different figures, but pretty much everyone agrees that the country has not been building nearly enough homes to keep up with demand — especially for middle and lower-income families. The failure to build those units is the single biggest contributor to the affordability crisis that in recent years has spread from a few coastal cities to a much larger swath of the country.

Sam Khater, Freddie Mac’s chief economist, said there was an irony to what is happening: The Federal Reserve is trying to snuff out inflation by increasing interest rates, which is leading to a pullback in construction, which will make housing even less affordable down the road. In a sense, policymakers are solving the immediate cost-of-living crisis (inflation) by making the longer-run cost-of-living crisis (housing) even worse.

“It’s an unintended consequence,” Khater said. The housing market has responded so quickly to the Fed’s actions because it is built on debt, making it ultrasensitive to interest rates. Builders borrow money to build new homes, then sell them to buyers who, for the most part, borrow 80% or more of the home’s cost. When banks pull back on credit by raising monthly borrowing costs, it causes buyers and builders to retreat for different versions of the same reason, which is the fear they will be left with property they can no longer afford and might be worth less than they paid for it to boot.

The slowdown in homebuilding would not have such a significant effect on the nation’s overall housing supply if builders could quickly adjust to demand, making up for the recessionary shortages during boom times. But they can’t: Housing is a hugely fragmented industry of mostly independent companies that includes developers that spend decades turning raw land into parcels that can be built upon and subcontractors that hire laborers by the hour. The system works fine when demand is strong, but deteriorates with even a modest sign of trouble and can take years to restart, creating a backlog that gets deeper each time building slows.

The collapse of the housing market during the Great Recession put many smaller homebuilders out of business, and left the ones that survived extremely cautious. Housing starts cratered to 554,000 in 2009 from 2.1 million in 2005, then barely recovered, even as demand steadily grew. Only in the past couple of years did developers finally start building at something close to their pre-bubble pace — only to slam on the brakes now that rates are rising.

That cyclical dynamic is exacerbated by another problem. In the places where new housing is needed the most, existing homeowners do not want it and local governments will not allow it. Around the country, a combination of rampant NIMBYism — neighbors who protest new development — along with zoning and land use regulations, heavily limit how much housing can actually be built.

In other words, backlogs grow during downturns because of market forces, then persist during good times because of government-imposed limitations on construction.

“It’s a chronic issue,” Khater said. “We have both a market failure and a government failure.” Those failures are both on display in San Francisco, which has a decades-old housing shortage. When interest rates were low and demand was strong, developers desperately wanted to build, but had to spend years obtaining the necessary approvals and permits. Now that the market has turned, some of the projects that managed to survive that process are being called off because developers can no longer afford to build them.

Michael Covarrubias, CEO of TMG Partners, is a developer of residential and commercial property in the Bay Area. Covarrubias said he had two projects he could legally start construction on, with about 800 condominiums between them. But they are furloughed because of rising costs of materials and financing.

“Real estate at its core is a simple business,” Covarrubias said. “You have to get a return on your costs, and it’s harder and harder to make the math work.”

Around the country, the persistent shortage of housing has caused a number of legislators to revisit an old idea: public housing. In California, Hawaii, Rhode Island, Maryland and Colorado, legislators have either introduced or passed proposals to allow state and local governments to develop housing for a range of incomes. “If government gets in the business of providing housing, we can be that countercyclical supply,” said Alex Lee, Democrat of San Jose and member of California’s State Assembly. This year, Lee introduced a measure that would have created a new state agency to build mixed-income housing across California. It failed in committee, but Lee has vowed to continue pursuing government-built housing.

To expect private companies to build during downturns is to expect them to risk financial ruin. The government can try to help families with rising costs by capping rent increases and providing subsidies or loan programs that help first-time homebuyers.

But unless the government builds new housing itself, or creates incentives for builders like Hayden to keep at it when it does not make sense, the housing shortage is destined to compound each time the economic winds blow against the building industry.

The precise solution is politics, but there is little mystery what the problem is. America does not have enough housing, and someone has to build it, in bad times as well as good.

This story was originally published at nytimes.com. Read it here.
Real Estate