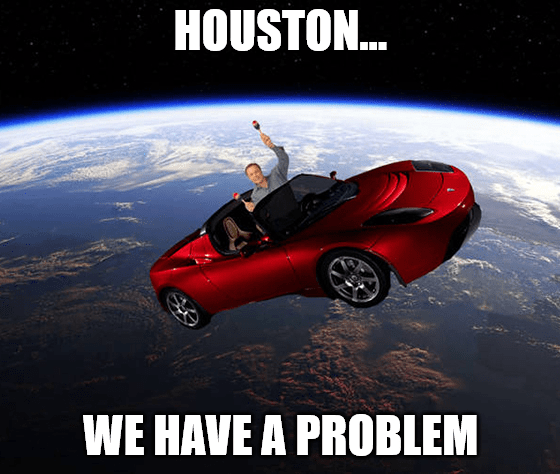 Comin’ down the mountain…

One of many EV makers, Tesla (Nasdaq: TSLA) has their own opinion. Everybody has their electric vehicle (EV). Charging it up, it hurts so bad … and I said:

What in the wild, wild world of stocks was that?

But “cash in?” Didn’t Tesla just kill earnings? Tesla to the moon, baby!

Yeah, I’m not so sure about that last part. The situation is changing rapidly for Tesla … and it isn’t very pretty.

I’ll grant you that Tesla’s earnings looked pretty solid. Here are the numbers in case you missed yesterday’s report:

So earnings skyrocketed 57% from last year, while revenue rose 25%. If that’s all you looked at with Tesla’s report, you’re probably feeling pretty good right now as a TSLA stock investor.

But if you look closer, you can see that Tesla is falling apart at the seams — and the company could be looking at a long, cold winter.

For instance, automotive gross margins plunged to 27.9% from 32.9% in Q1. In other words, Tesla is making less money on each EV it sells. And this is despite the company raising prices on Tesla EVs.

And then we have Tesla’s 254,695 Q2 deliveries — which were roughly in line with Wall Street’s lowered expectations. And by “roughly in line,” I mean that Tesla just scraped by on those lowered targets.

And then, Wall Street expects Tesla to deliver 1.4 million vehicles by the end of the year. That target is still achievable … assuming there are no more Chinese COVID-19 lockdowns. That’s a pretty big assumption if you ask me.

And then we have Tesla’s negative free cash flow. Yes, I know the company reported that free cash flow increased by $902 million on the quarter. However, $936 million of that came from the sale of 75% of Tesla’s bitcoin holdings. I’m sure y’all can do the math on that one…

And then we have the rise of serious competition, finally. BYD Company (OTC: BYDDY) took the lead in EV production last quarter. Ford and General Motors are ramping up EV production stateside. In fact, Ford’s F-150 Lightning is selling way faster than Ford can keep up production.

There’s also Kia, Hyundai, Toyota and the king of all automakers, Volkswagen … they’re all getting into the fray.

And then we have CEO Elon Musk. Now, I typically don’t talk about politics in Great Stuff, but it’s starting to get materially relevant to Tesla’s bottom line. Keeping this as civil as possible, let me ask you this, Great Ones:

Y’all know who I’m talking about. Now consider how many of those customers Elon Musk’s antics this year have triggered, upset and “owned.” He’s basically become a pariah among his main customer base, and it is sure to affect Tesla’s sales … especially with the younger generations. 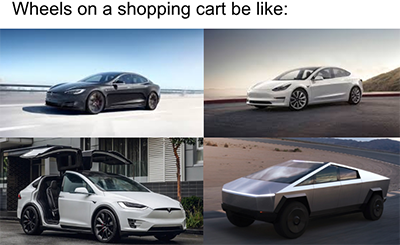 I mean, American consumers have become so politically charged over every little thing that I know I’m going to regret even bringing this point up.

And I haven’t even talked about Tesla moving its headquarters to Texas from California due to pandemic regulations, or its treatment of workers, or the amount of government funds it receives or where Musk got his money in the first place…

I fear for my inbox, Great Ones. Remember, please, that it ain’t me. It ain’t me. I ain’t no senator’s son. I’m just the messenger.

The bottom line here is that there are entirely too many “and thens” plaguing Tesla right now. There’s entirely too much uncertainty for Tesla … and Elon Musk is apparently hell-bent on biting the hand that feeds him.

All of this will come to a head sooner or later for Tesla, and it won’t be pretty. For what it’s worth, I’d take Jane’s Addiction’s advice and “cash in now, baby” on TSLA stock. Or if you prefer Steve Miller: “Go on, take the money and run.”

And now’s the time on Great Stuff where you email me and tell me I’m wrong or yell at me about political stuff. Go on, you know you want to: [email protected].

But if you’re ready to get worked up, ranting and raving over something that can actually … you know … make you money, there’s Mike Carr.

While the pandemic upended the world economy, Mike crushed the Dow by more than 14X in a single year. And he has since gone on to produce winning gains of 129% in six hours … 280% overnight … and even 313% in just 24 hours.

All trading just ONE ticker symbol … ONCE per week.

But now, Mike’s changing the game once more. Click here to see how!

And now for something completely different … unless you’re a longtime Great One, in which case, join me in welcoming back the Friday Four Play! 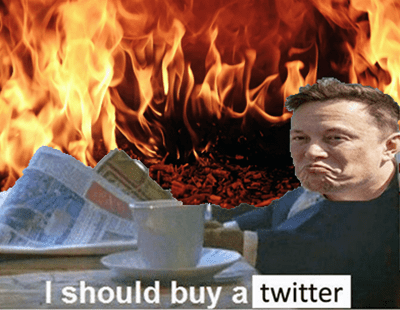 Not only did they spend the quarter getting torn one way or another over the Elon Musk buyout, that quarter is ending with an absolute trainwreck of an earnings report.

So no double beat and raise, huh?

How about a double miss … with no guidance?

Revenue came in at $1.18 billion and fell way short of estimates for $1.32. Worse still, earnings came in at a loss of $0.08 per share, whereas analysts wanted a profit of $0.14. Guidance is canceled because of … *checks notes* … Elon Musk and the inherent uncertainty of going to court with him.

But just like with Netflix (Nasdaq: NFLX), Wall Street doesn’t want to hear about those facts and figures — it’s all about the user base, baby. I mean, what is Elon Musk fighting/not fighting for anyway, if not a healthy, spam-free user base?

Yeah … about that. Twitter’s monetizable daily active users shot up 17% year over year, but that paled in comparison to analysts’ ever-growing expectations.

Still, as disastrous as this report is, things could’ve been worse for Twitter.

How? How, Great Stuff?! That’s impossible.

It could be worse … you could be Snap (NYSE: SNAP).

Great Ones, I had low expectations for the Snapchat company going into earnings, and somehow, I was still let down.

Sure, we could talk about Snap’s narrower-than-expected loss. And we could poke fun at the company’s revenue missing analysts’ targets or its laments about losing advertising revenue. We could, but…

It’s not unfair to say the reaction to Snap’s report is more interesting — and telling of investors’ fears — than the company’s report itself.

SNAP shares fell off the face of the Earth, tumbling 38% today. The carnage spread throughout the rest of the social media sector: Meta (Nasdaq: META) is down 7%, and Twitter is … well, Twitter is trying to reorient itself from things.

Now, for all y’all getting déjà vu right now, you’re not alone, nor are you going crazy … as far as I know. ‘Twas merely four days ago that I noted:

So … why are the other social media stocks falling as well?

I mean, Twitter warned of reduced ad spending on its platform — which is a legitimate concern. After all, ad spending is the first thing to get cut when corporate budgets come under scrutiny.

But if you’re an advertiser, you’re gonna advertise where the people are. And where are the people? Not on Snapchat… Which ad budget would you kill off first? Facebook or Snapchat? I reckon Snapchat —because Snap’s management basically confirmed as much in its conference call.

In an attempt to calm SNAP investors — if you can even call it an attempt — CFO Derek Anderson chimed in:

So as competition, whether it’s with TikTok or any of the other very large, sophisticated players in this space, has only intensified and it’s hard to disentangle the numerous factors here impacting what’s clearly a headwind driving deceleration in our business.

You ever have so many problems with your company that you can’t even discern the competition’s headwinds from your own company’s boneheaded decisions? Snap’s been shooting itself in the foot for years, all while TikTok steals its lunch.

“Hard to disentangle,” indeed. Don’t worry, Snapchat for web will save SNAP. Any day now… 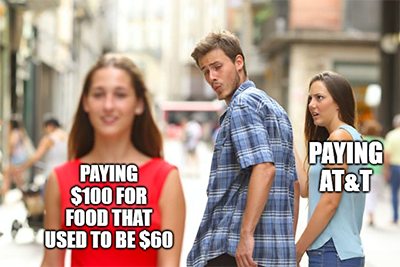 Wow, so much for a “fun Friday.” Where did y’all hide the positive news? The encouraging news?

AT&T (NYSE: T) investors had a lovely wake-up call this morning as virtually every financial news headline screamed: “AT&T is down 10%! It’s the stock’s worst day in two decades! The sky is falling!”

But this is AT&T we’re talking about here — a veritable dinosaur of a business that’s stuck spinning a bajillion broken plates above its head. How bad could things really be?

Now there’s a visual for you.

It goes without saying: If out of the blue you have to warn your investors about lowered cash flows … things aren’t all gravy behind the scenes. Even more concerning is what AT&T reported next: About $1 billion of that reduced estimate is because AT&T customers simply aren’t paying their bills.

I’m not surprised to hear consumers are paying bills more slowly; they are already struggling with higher food and energy prices. I’m not worried so much for AT&T as I am for the broader consumer economy. You wonder if this is the canary in the coal mine.

So much for that healthy consumer we keep hearing about.

While the “broader consumer economy” isn’t just an AT&T problem, the company isn’t doing itself any favors. I can’t ignore the fact that AT&T used most of its Discovery sale proceeds to pay down debt. It also raised prices, and now customers aren’t even paying their bills.

AT&T is still a slow-moving disasterpiece. Same as it ever was. 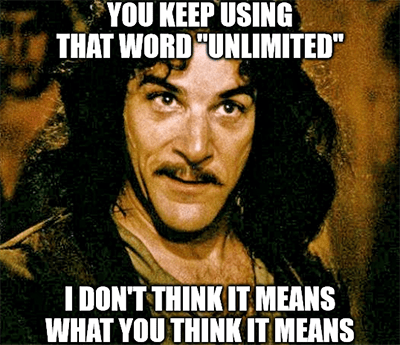 OK, so AT&T ‘s problems can basically be summed up thusly: Well, it’s AT&T. What do you expect?

If it were just AT&T, we could all laugh and go about our day. But Verizon Communications (NYSE: VZ) is having the same exact problems … albeit, with a crap ton less debt.

Verizon’s Q2 report was nothing spectacular. Earnings were a penny shy of expectations and revenue was in line.

Verizon’s full-year guidance however … whoo boy, was that a hot mess. The company slashed wireless service revenue to growth of 8.5% to 9.5%, down from prior growth projections of 9% to 10%.

It’s painfully clear that wireless customers are badly feeling the pinch of higher inflation and a degrading economic outlook. I mean, people love their smartphones. In many cases, smartphones are absolutely essential.

When these customers cut back on upgrading or paying bills on time … something’s gone horribly wrong. AT&T tried to gloss over the situation. But Verizon just straight up said: “It’s bad, yo” by cutting its full year guidance across the board.

Verizon even launched a new “unlimited plan”… Though, in true Verizon fashion, there’s this nonsense: “Data speeds are reduced to 2G after 0.5 GB/day.” You can hit that in about 20 minutes on any social media platform … and in about five minutes on TikTok.

Make no mistake, Verizon having the same problems as AT&T is bad. This might very well be a “canary in the coal mine” indicator here.

Wanna Blow Through Those Data Caps?

It’s like Pringles: Once you pop a few of these bite-sized, meaty market morsels, you won’t be able to stop. We’re talking stock memes, hot takes and all the general craziness that we can’t publish in email.

So go on and check us out!

Of course, if you’d like to stick with plain old email, let me know what you think of today’s insanity: Tesla vs. Twitter, AT&T vs. Verizon, Snap vs. itself … all that jazz.

Write to us whenever the market muse calls to you: [email protected] is where you can reach us best.

I mean where you can check out some more Greatness: