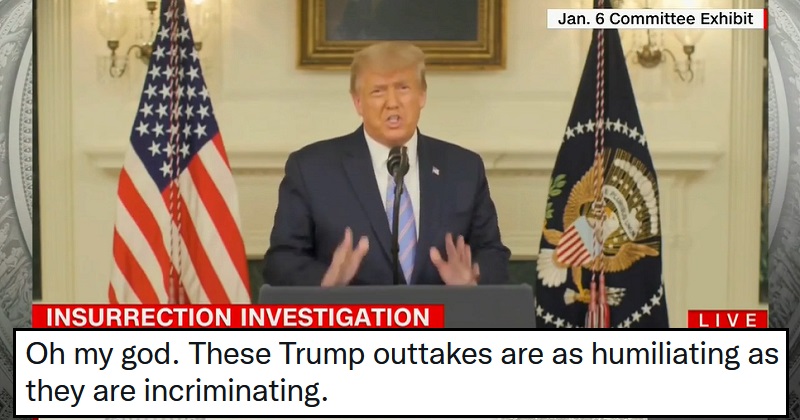 The January 6th hearings have paused until September, with the concluding evidence being amongst the most explosive.

It concerned the 187 minutes between Donald Trump telling his supporters to march on the Capitol to his inadequate request to them to stand down, as well as his criticism of the Vice-president, which put Mike Pence in severe danger.

Important point made at tonight’s Jan 6 hearing — Trump did not record his message telling mob to go home until after it had become clear that the attack would fail.

True to form, the former president ranted about the hearings from his Twitter-light social media site – Truth.

Trump is extremely mad online over at Truth Social pic.twitter.com/dLZpUyylQW

Proceedings veered towards It’ll Be Alright On the Night, when they showed the unedited version of Donald Trump trying to record an address to the Capitol rioters, little more than a day after he’d said he loved them and that they were special.

here’s raw footage of Trump recording his January 7 video message, getting mad and lashing out, and not wanting to say “the election is over” pic.twitter.com/jIJ2hbO901

“‘Yesterday’ is a hard word for me. Take out the word ‘yesterday’ because it doesn’t work!”

We understand why he didn’t want to row back on his lie about the election, but we’re less clear on his problem with “yesterday”.

These reactions to the clip say all that needs to be said.

Oh my god. These Trump outtakes are as humiliating as they are incriminating. pic.twitter.com/rI5PHrYx6s

There is so much wrong with this… https://t.co/PcZQrqHw76

This says it all. Wouldn’t even say that the rioters who killed people and did millions of dollars in damage to the U.S. Capitol broke the law. https://t.co/A79FJBnmHn

It wasn’t even the entire recording session.

The outtakes from Trump’s Jan. 7 were only a portion of the lengthy taping session that day, @Kevinliptakcnn and I are told. Multiple people say it took about an hour to record what ended up being a three-minute video.

Treason has a blooper reel.
pic.twitter.com/ZNTE1VwPva

WANT MORE POKE?
Get the best of the day’s posts delivered direct to you by joining The Poke+ on Facebook