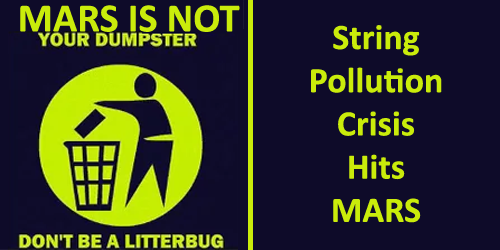 I am forever being plagued by finding bits of string and twine and yarn in odd places in my home, yard, boat and car. Now, pollution by odd bits of twine and string have reached CRISIS PROPORTIONS, affecting even other planets in our own solar system!

Megan Marples, CNN journalist, reports:  “Mysterious bundle of string on Mars’ surface found by Perseverance rover”.  ( quotes below from this article) This image is provided by NASA…and so far, at least, no one has suggested that this incident is proof of String Theory, but it is Proof of String on Mars and, if on Mars, who is to say that anthropogenic string pollution has not found its way to other planets in our own solar system or even far-flung exo-planets.  There is no telling how dangerous String Pollution may be to any life that may exist there.

If not exactly proof of string theory in general, some think it might be supporting evidence of Spaghetti Theory, a tangled sub-set of String Theory:  “The rover’s front left hazard avoidance camera took a photo of the light-colored object on July 12 that some people likened to spaghetti.”

NASA and JPL are making a solid effort to explain away the finding:

“The string could be from the rover or its descent stage, a component similar to a rocket-powered jet pack used to safely lower the rover to the planet’s surface, according to a spokesperson for the Perseverance mission at NASA’s Jet Propulsion Laboratory in Pasadena, California.”

“Perseverance had not previously been in the area where the string was found, so it’s likely the wind blew it there, the spokesperson said.“

It does not surprise this author that neither JPL or NASA has supplied any information that shows that the rocket-powered jet-pack or the Rover itself actually used such a piece of string anywhere in its construction.   I mean, really, if you were building a rocket to Mars, would you tie things together with bits of string?

I had always blamed my four kids for the String Pollution I encountered in home, yard, car and boat.  But I am certain that none of them have ever been to Mars – so they have a solid alibi in this case.

Do you have any suspects?