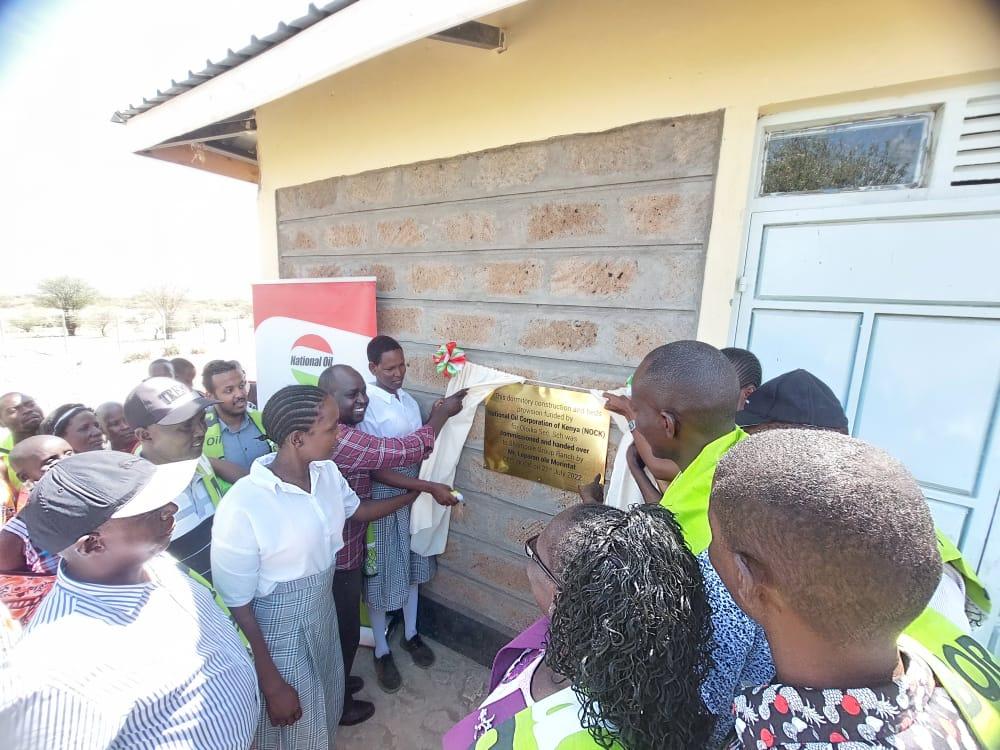 The National Oil Corporation of Kenya has commissioned and handed over key community sustainability projects in Block 14T (Magadi Sub-basin).

NOCK has been conducting oil exploration efforts within the block’s southernmost section 14T, which stretches from Kajiado, and Narok all the way to Nakuru and Baringo counties. These counties are located in the southern part of Block 14T.

The Chief Executive Officer of the Corporation, Leparan Morintat, was on in the course of a tour of the block, where the Organization is currently carrying out more data acquisition when he commissioned and handed over a modern girl’s dormitory to Oloika Secondary School.

The dormitory was outfitted with forty (40) double-decker beds and came complete with an ablution block. Oloika Secondary school, located in Shompole, was among the beneficially of these initiatives.

NOCK has implemented Shompole Group Estate community sustainability measures as part of its commitment to delivering on its promise to the community.

“The leadership of the Shompole group ranch, which is present with us today, has permitted us to conduct business in this region. On behalf of the Corporation, I am ecstatic to announce that the girls will now have a contemporary, respectable, and secure place to sleep tonight. This dormitory will undoubtedly provide students with improved opportunities to study and thrive in their academic pursuits,” stated Morintat.

“The Corporation is also considering your other demands and the proposal you provided. We will get back to you as soon as possible regarding both of these matters,” added Morintat.

Olkiramatian Group Ranch, Shompole Group Ranch, property owned by the Musenke Community, and a few private ranches are all included in the Magadi Sub basin’s territory.

The Corporation has in the past undertaken other sustainability projects, such as the drilling and equipping of two boreholes at Pakase and Olkiramatian, the initiation of the Musenke Irrigation Project supporting 800 homes, and the installation of dormitory beds and the provision of 300 desks and chairs for Olkiramatian Arid Zone Primary School, amongst other initiatives.

In addition, the Corporation has supported the rehabilitation of Olkiramatian cattle dip.

NOCK completed a Magnetotelluric (MT) exercise on the Magadi sub-basin at the end of the previous year, intending to gather data as the company strives to improve the quality of its data on the block to assist in the identification of drill-able prospects within the block.

The exercise was designed to gather more data because the Corporation wants to help identify drill-able prospects within the block. The Corporation is currently conducting a number of further studies for the purpose of data collecting, which will assist in marketing the block to prospective farm-in partners.

As a result of the completion of the initiatives, the Corporation’s connection with the communities that live within the block has significantly improved.

Data on gravity (FTG), aeromagnetic fields, magnetotellurics (MT), and seismic activity have been collected at National Oil’s own exploration holdings in Block 14T, which is situated inside the southern Tertiary Rift Basin.

Additional acquisition of 2D seismic data was carried out in 2017, and by the beginning of 2018, two stratigraphic wells had been drilling.

Block 14T shares a northern boundary with Block 12A, which is managed and controlled by Tullow Kenya BV. The Cheptuket-1 well, drilled in March 2016, returned promising oil indications.

In addition, the Tertiary Rift is the site of Kenya’s first commercial hydrocarbon finds, which are currently undergoing evaluation to prepare for development and production.