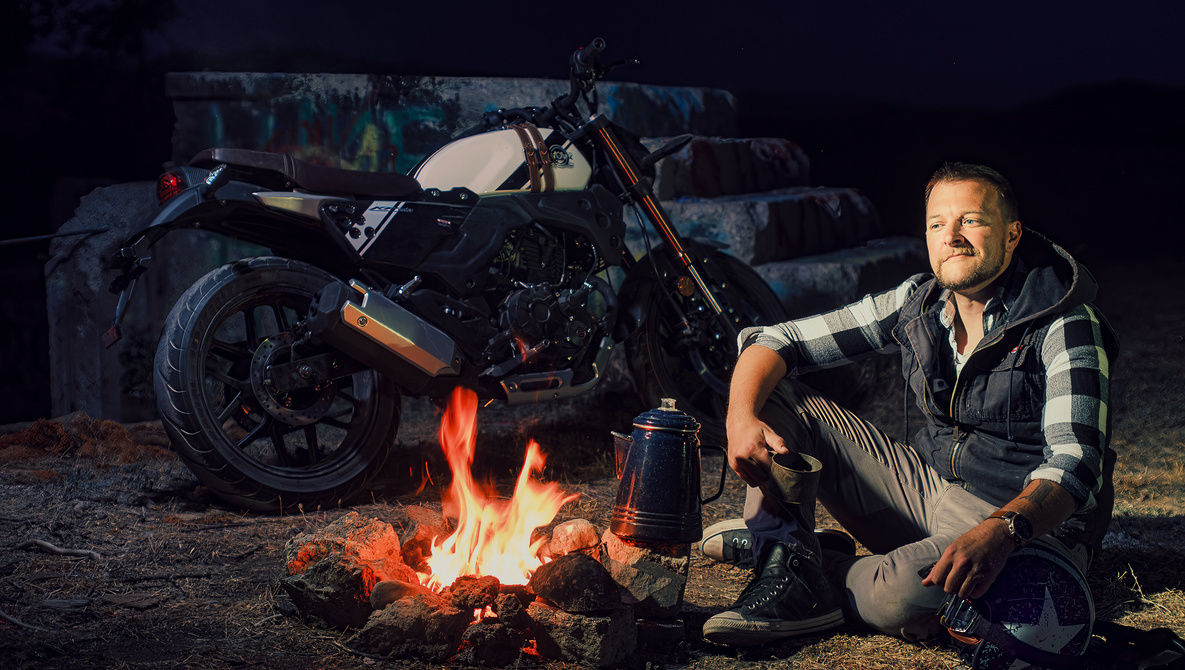 Those who wish to practice their off-camera flash technique or simply, wish to create a successful concept shoot to boost their portfolio, should strongly consider practicing the arrangement with themselves as the subject.

The use of off-camera flash (OCF) for the uninitiated is often a very intimidating prospect. It certainly was for me when I was learning. The pressure of performing efficiently and smoothly with a subject (especially a paid client) can be immense when juggling the complexities involved with the process. You can diminish this during your learning phase by practicing with yourself as the subject. Even someone with some experience using speedlights and strobes off-camera can benefit from this habit if they are planning a concept shoot with professional talent to make sure they are on point when the day arrives, having already ironed out many of the technical challenges in advance while going at their own pace instead of feeling hurried.

I recognized early on that using artificially introduced light for my portrait and commercial work was how I could really stand out from my local contemporaries. At the time, few local shooters were using the OCF workflow, and a good majority specifically advertised themselves as strictly natural light photographers. Unwilling to limit myself in such a manner, and eager to stand out from the crowd, I immediately began the process of investing in OCF gear and studying how to use it through books and free online education. I didn’t find any scarcity in instructional material, but the techniques and mechanics of OCF do have things about it that are often baffling as a beginner, and I also quickly realized this was something I was going to have to practice a lot.

So, what I did was come up with? A new shot idea each day I had to practice and made myself the subject. Thanks to the use of a tripod and 10-second timer, wireless remote, or smartphone camera app, one can make calculated and thoughtful testing of their OCF shoot concepts in a no-stress situation. The camera app option is probably the best bet if your camera brand has one available that is reliable and allows you to remotely adjust your camera settings and see through the lens from your phone. You can shoot, reshoot, and shoot some more to get it just right with no one breathing down your neck, which is well worth any inconvenience you might have from moving back and forth making your adjustments to your lights or camera, and returning to your place in the shot.

This practice allowed me to easily learn how micro-adjustments in light direction and distance affect a photo. It allowed me to slowly get good at feathering my light modifiers. It let me try every little hunch and theory I had with no pressure about time and result performance. This kind of unfettered and uninterrupted creative learning is, in my opinion, one of the best things you can ever do for your portrait photography. It definitely paid off for me. My eventual (and now standard) use of OCF in my client work did exactly as I suspected it might — it made my work stand out compared to other people. When I say “stand out,” I am not implying better, I am merely implying different, although I do believe that the use of OCF does ultimately allow you to surpass the limits of a shot that was otherwise shot only with available light.

One time I was stuck inside an airplane hangar with classic cars while waiting for it to stop raining so I could proceed with filming an episode of a TV documentary series. Instead of scrolling on social media, I proceeded to spend the next four hours with the placement of four speedlights in various locations to create a dynamically lit scene. Each time I activated a 10-second timer and experimented with the optimal arrangement until I felt good about the shot I got, making a mental note of how each change affected my final results. Four hours of this led to an immense boost in the knowledge I had of how a poorly-lit environment can transform into something spectacular with the correct application of introduced lighting.

More recently, I made myself the subject in a test run for a general shoot concept I intended to use in an upcoming workshop I am holding on my off-camera flash workflow. I wanted to have a shoot concept prepared to allow my workshop attendees to apply the techniques I teach them, and since I was also bringing in a professional model for the shoot, I wanted to iron out the kinks on the concept so I wouldn’t have to when the day arrived. This time, friend and fellow photographer, Cory Madsen, helped with the process so I could forgo the tedious 10-second timer. By the end of the night, I felt good about how smooth the actual shoot was going to go, and I really liked the result of the test run itself.

Working under high pressure is the fate of any professional portrait photographer, and the anxiety that can come from unexpected technical challenges, can be major speed bumps on the road to a successful shoot. However, by using yourself as a practice subject, you gain not only improved proficiency in the use of OCF, but also the added bonus of an overall better perspective on the experience of your subjects as well. This allows you to connect, relate and communicate better with them. It literally makes you a better photographer from both sides of the lens at the same time.