The survey revealed 47 per cent of small business owners say their businesses are in jeopardy of closing by the northern hemisphere Autumn.

But before one panics, last summer 35 per cent of businesses surveyed feared they were on the brink. And presumably many survived to complete the survey again.

According to this year’s survey however, nearly half of all small business owners, including 59 per cent of retailers, say they’re at risk of shutting down. Owners cite inflation, higher interest rates, fuels prices, rent hikes, supply chain disruptions, lower consumer spending, and fears of a recession, as well as accumulated losses from 2020 and 2021.

While larger retail chains are expected to have ensured sufficient inventory for the holidays, smaller retailers, according to the survey, are moving defensively, placing fewer orders amid fear of losses. Thirty eight per cent of businesses surveyed claimed to be reducing orders by more than 20 per cent compared to last year.

Another Alignable survey revealed 35 per cent of small businesses in June couldn’t pay rent in full or on time, up from just nine per cent who were in the same predicament in January.

Across most states and provinces, concerns insufficient funding to remain afloat is widespread.

Small business owners in Colorado, Michigan, Ohio, Pennsylvania, and Texas top the list in terms of those in jeopardy.

As Table 1 reveals, Colorado appears to be most at risk, with Michigan a close second and Ohio, Pennsylvania, and Texas equal third for states most fearful of SME’s closing by Autumn, if economic conditions don’t improve. 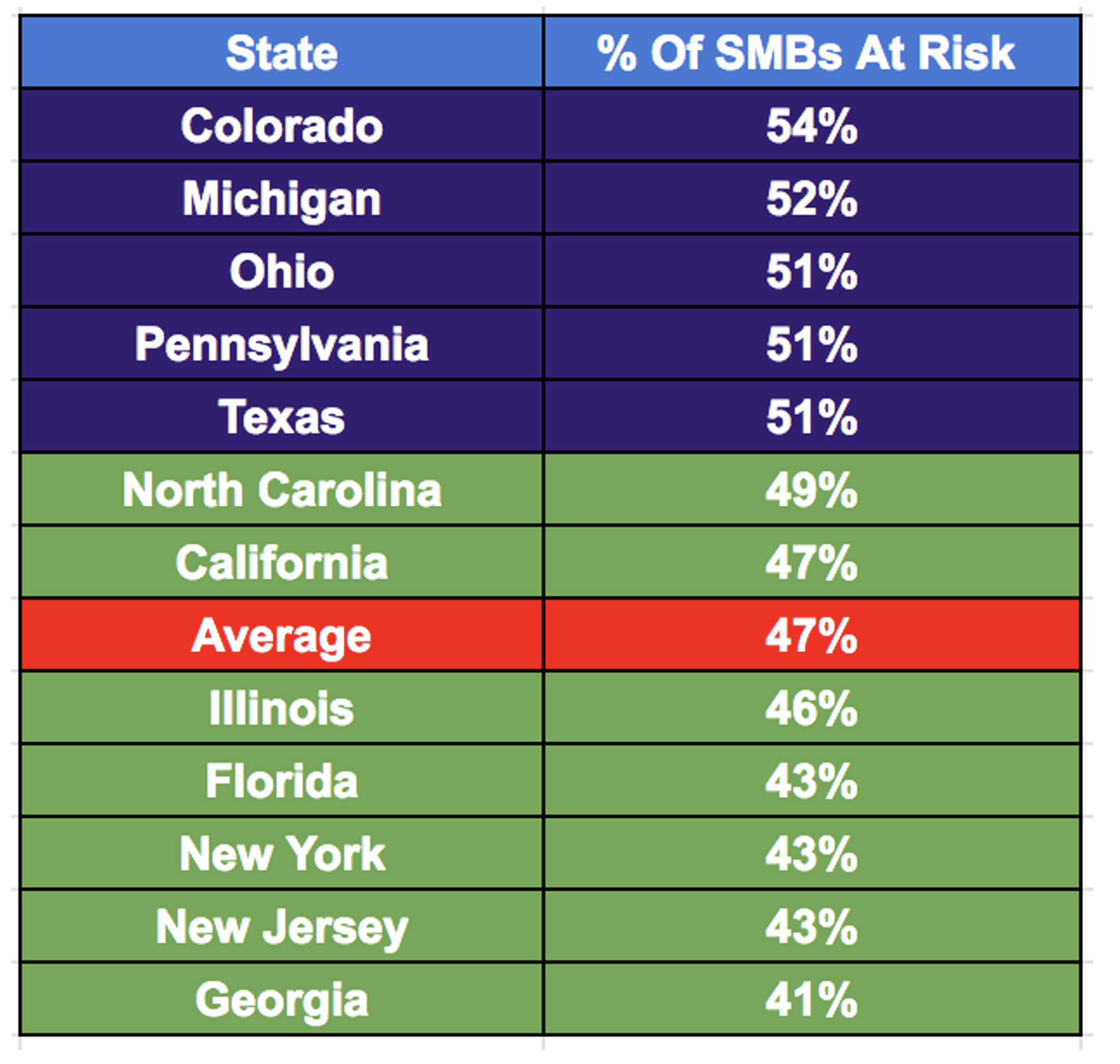 According to Alignable, the situation is similar in Canada, with the national average at 47 per cent.

MORE BY RogerINVEST WITH MONTGOMERY

This post was contributed by a representative of Montgomery Investment Management Pty Limited (AFSL No. 354564). The principal purpose of this post is to provide factual information and not provide financial product advice. Additionally, the information provided is not intended to provide any recommendation or opinion about any financial product. Any commentary and statements of opinion however may contain general advice only that is prepared without taking into account your personal objectives, financial circumstances or needs. Because of this, before acting on any of the information provided, you should always consider its appropriateness in light of your personal objectives, financial circumstances and needs and should consider seeking independent advice from a financial advisor if necessary before making any decisions. This post specifically excludes personal advice.