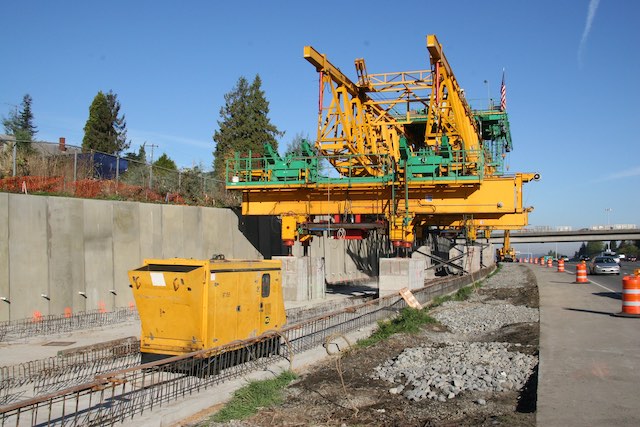 Danny Westneat, a columnist for the Seattle Times, openly wonders why Seattle is building so much light rail when we seem to be entering “an era of ‘untransit.’” He quotes a Stanford law review article saying that Zoom is “the modern equivalent of the streetcar — a technological advance that will profoundly alter land use.”

Puget Sound Transit is spending tens of billions of dollars building high-cost, low-capacity transit lines that make even less sense after COVID than they did before, yet there is no indication that Sound Transit is changing is plans in response to the pandemic. Photo by brewbooks.

Instead of altering their plans, however, transit agencies and transit advocates are busy trying to figure out how to justify increased subsidies for decreased ridership. Many of them are hoping that “equity” can be the issue that tips the balance in favor of more subsidies.

A group called Elevated Chicago thinks that equity demands more transit subsidies and more subsidies to high-density development near transit stations. I wonder what that group thinks about the fact that more than 70 Chicago Transit Authority workers made more than $200,000 last year, and one made more than $300,000. How equitable is that?

Meanwhile, Streetlight has published a report on how to ensure equity in transportation. At first glance, the report is about all kinds of transportation, but the only examples given are public transit.

Telling low-income people to rely on transit while high-income people drive cars is also inequitable because cars are so much more efficient, costing less and getting people to destinations much faster. The real issue transportation equity is that about 7 million low-income households lack access to an automobile. Those who sincerely care about equity should devote less effort to transit and more towards getting more low-income people into cars.

If the $64 billion spent subsidizing transit in 2020 were spent on helping low-income people buy cars, it would have been enough to give every carless low-income family more than $9,000 towards a car. I don’t advocate that, but for a lot less money we could give people low-interest loans to buy a car, thus giving them access to the same economic opportunities that everyone else has.