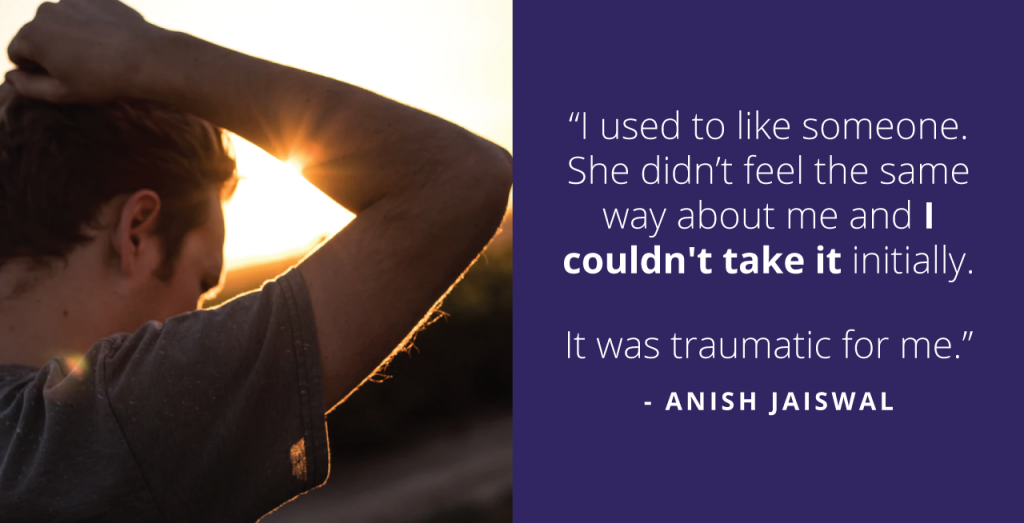 Seeing your feelings not being replicated at love can leave one hurt, dejected, lost and traumatic. Anish Jaiswal, a 21 year student at KIET Group of Institutions experienced this too during college. From being someone who likes listening to music, meditating, reading and even rapping, Anish went to feeling suicidal thoughts.

“I used to like someone and had a lot of expectations. When I confessed my feelings after our friendship, she didn’t feel the same way and I couldn’t take it.”

Anish recalls himself being an introvert, over-thinker and anxious. When he realized that his love felt differently about him, such traits started overpowering him. It was traumatic but thanks to Anish’s dedication, he tried to work on himself by working out, and talking to people.

But little did he know that things were going to change when the college would reopen.

“When college reopened, facing her became challenging. I thought I could and then started having too many thoughts that why should I go in front of her with my sad face. She doesn’t want me.”

Anish even tried avoiding her and that didn’t work. He even tried talking to other people about his helpless situation and felt as if he was standing with a gun of advice pointed at him.

Responses such as your problems aren’t big enough, hurt Anish. He’d even get teased for his problems. This led to anxiety.

Anish still didn’t give up. He tried talking to his faculties about how much his feelings for that girl were bothering him. As part of this, he tried sharing with one of them. While she tried her best to hear him out for a month, she had other responsibilities and despite her willingness to help Anish, she couldn’t help much.

“She redirected me to another ma’am and then another sir. Everyone was worried that we were not able to solve my problem. So they realized that I needed professional help as they are not experts. They recommended YourDOST to me.”

When Anish finally connected with a YourDOST expert, he had his own hesitations. He thought he’ll be done in one session but later realized that it needs to be regular. The idea was to make him be able to solve his problems on his own.

“I randomly booked a session after I went home. I couldn’t talk at home so I went for a walk and talked to the counselor. She was speaking in English but I said I can express myself better in Hindi. She was very open to that.”

Hereon, Anish started working with his counselor on his coping mechanism after seeing his feelings not being replicated. His counselor suggested that everytime Anish felt like talking to the girl he liked, he could convert that thought into pain by pinching himself or putting a rubber band in hand and pulling it so that it breaks his thought pattern.

“To improve concentration, she asked me to put a needle in a thread or mix different pulses and then put a timer and separate them.”

The most effective technique that worked for Anish was putting a 3 hours alarm and when it rings, noticing what he was doing at that moment. Notice if whatever he was doing was productive or unproductive.

“She also suggested that I observe my surroundings whenever I felt anxious. When I’m anxious, I listen to songs I used to listen to with her. She asked me to try to listen to different songs.”

To work on his public speaking skills, Anish followed another technique of putting heavy metal songs on earphones and speaking in front of a mirror. This helped him. Soon he started noticing positive changes in his thoughts and behavior.

“My productivity came back. She used to hold me accountable to do tasks in a day to achieve my goals and share with her. I felt someone was there working with me.”

Like everyone else, Anish had dreams too. Dreams of working, supporting his family, buying things, which he’d forgotten due to bullying and painful incidents. With therapy, it came back and that’s progress according to him.

But reaching a stage where Anish would feel normal in front of the girl who didn’t feel the same way for him, wasn’t going to be a cakewalk. He used to be fine when she was not around and felt anxious when she’s around. Therapy trained him to be normal even if she’s around.

“First step was to kill the hopes and then enhance my friend’s circle. She wasn’t wrong because she didn’t feel what I felt for her.”

Anish today is on a path of acceptance and self-awareness. He calls his overall improvement being able to face pain. Talking about how much his counselor supported him, Anish says,

“She’s a wonderful listener. She tries to understand why I’m saying what I’m saying. This is a big thing. When I used to tell her it’s been close to 2 years I’ve been facing this problem, she used to encourage me that we’re together and this time we can overcome it. She used to appreciate me also.”

While others used to only compare Anish with others and say his problem was small, his counselor understood that his problem was big for him. He’s forever grateful to her for this. Wearing the new confidence on his sleeves, Anish has some words of wisdom for those suffering in silence.

“You’ve to talk it out. Without that, there’s no solution. Speak in front of a mirror, write it, whatever helps. Once you do that, the burden reduces.”

Anish’s Warrior Tips:
1. The best part about counseling is that someone is listening
2.Counseling is normal.