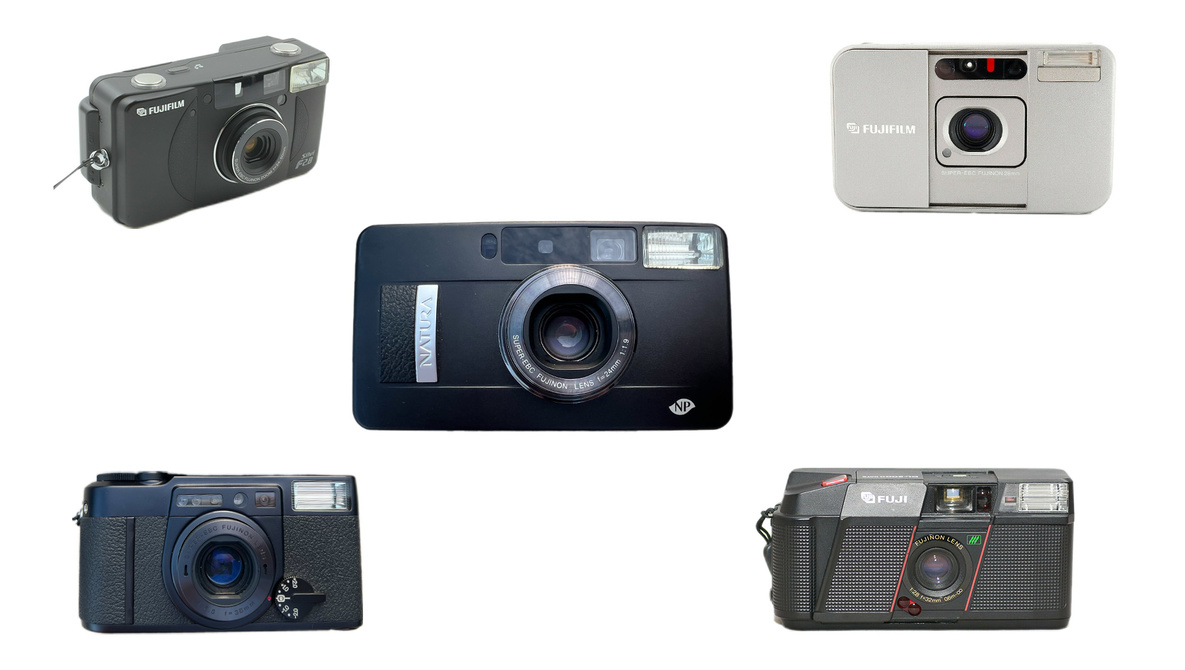 Fujifilm gets a pretty bad rap these days from the film photography community. So, it’s easy to forget that from the 1980s to the early 2000s, Fujifilm produced some of the best cameras ever made: medium format, point and shoots, the extraordinary Xpan, and a sack full of other interesting goodies.

I often wonder what it would be like if Fujifilm ever started up the production lines again on their cameras. Which ones would they bring back? Here are five point and shoot cameras I’d love to see made again.

The Fuji DL-200 may not look like much, but this was a revolutionary camera 40 years ago. Released in 1983, it was known as the Fuji Cardia in Japan. The DL200 had not one, but two ingenious features that made it foolproof for beginners.

It’s thought to be the world’s first drop-in loading camera. So what’s drop-in loading? It’s the feature that many film shooters didn’t know they needed. In fact, most of us don’t. The back door of the camera only opens just wider than the width of a film roll, allowing you to drop the canister in. When you close the door, the camera works its magic and loads the film for you.

The second feature was even more curious. Like many future Fujifilm cameras to come, the camera featured film a pre-winding safety system. This is where after the film was loaded, it was wound all the way to the last frame, which was then exposed first. As you take photos, your exposed frames are wound into the canister. That means that if you did accidentally open the film door, your precious memories were safe.

As for power, the DL-200 was powered by two CR123A batteries. However, there was a catch: the batteries were soldered into place inside the camera. That’s right, you had to send your camera back to a Fujifilm dealer to have the battery changed. Hopefully, this wouldn’t happen too often, as Fuji estimated that the battery was good for about 1,000 shots or 5 years, whichever came first, presumably.

The Natura S line was launched in 2001, followed soon after by the Natura Black. It quickly became known as the moonlight camera, as it sports one of the fastest lenses ever seen on a point and shoot: f/1.9 The camera was such a big deal for Fujifilm they even renamed their Superia 1600 film “Natura” in Japan to match the name of the camera. 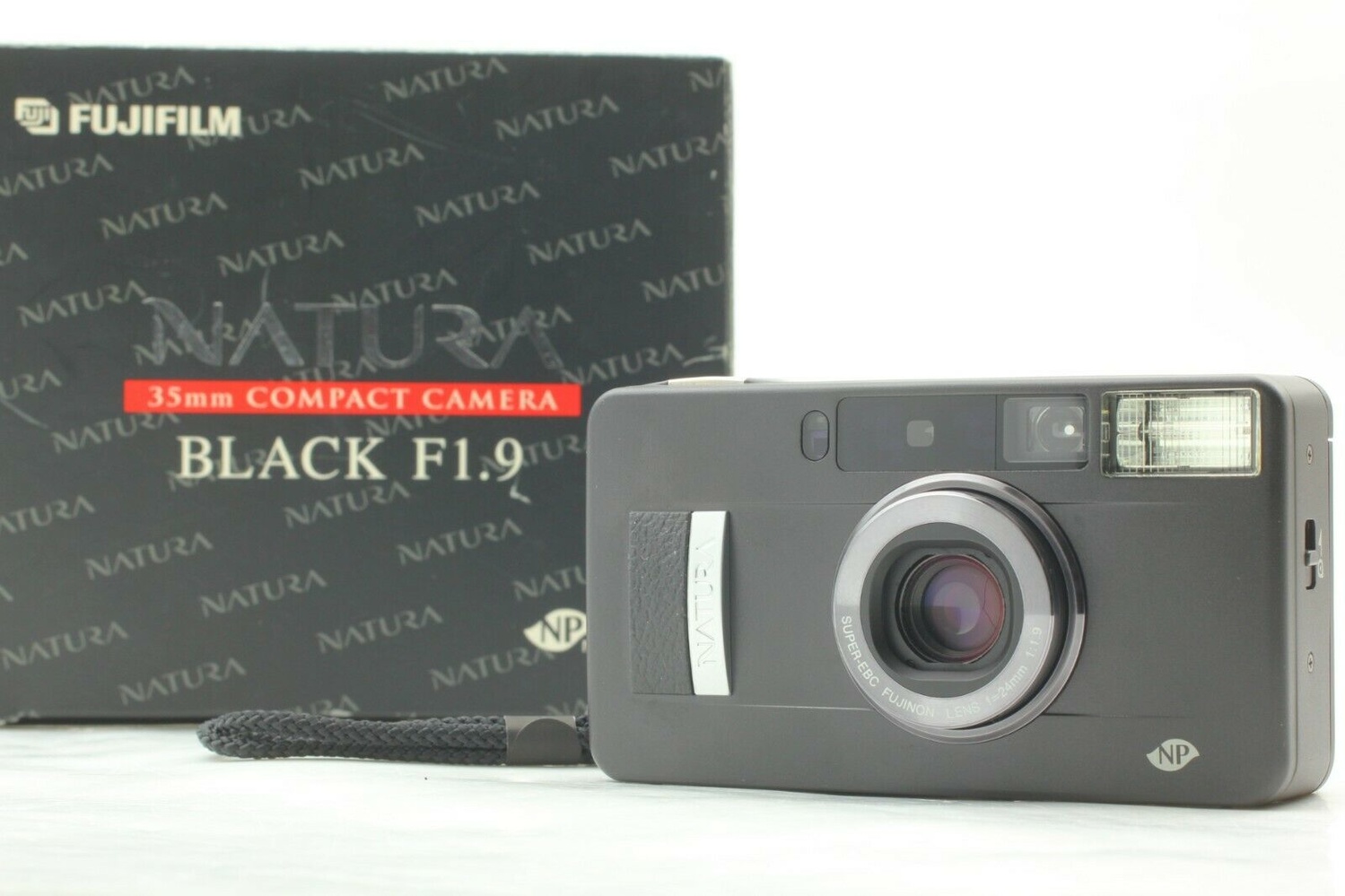 Unlike other premium options, the Natura doesn’t have aperture priority mode, but it does have a cool trick up its sleeve. If you load the camera with 1600 or faster speed film, it enters Natural Photo (NP) mode. In this mode, it shoots wide open at f/1.9, and the camera assesses the brightness of the subject in the scene, adding up to two stops of exposure compensation to give natural-looking photos.

Another unusual feature of the camera was its wide angle 24mm Super EBC Fujinon lens. This, paired with NP mode, made it ideal for taking to parties, indoor events, and nightclubs. The Natura was a domestic-only release, which is why the controls on the back are in Japanese. Thankfully it’s not too tricky to figure out.

The Fuji Tiara has become a cult classic among many film photographers. The original Fuji Tiara was released in 1994 and was mostly sold in Japan. There was a limited release in Europe, where it was sold as the Fuji DL Super Mini. A couple of years later, Fuji released the Tiara II, but there’s not much to distinguish between them. 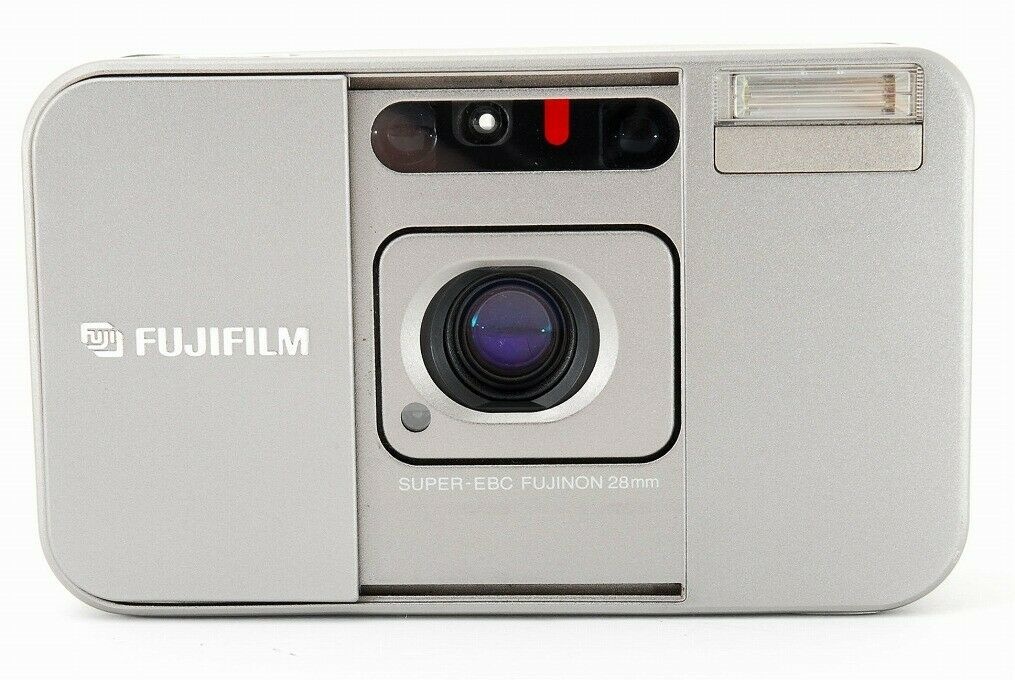 There are claims that Tiaras are every bit as good as other compact premium shooters such as the Olympus Stylus/MJU line. The comparisons are due to its sharp Fujinon lens, though the focal length is a little wider at 28mm. Like the MJU I, the maximum aperture of the Tiara line is a respectable f/3.5.

The comparisons with the Stylus line don’t end with the sharpness of the images. The Tiara is pretty small, and some people say that like the MJU II, it’s a little slippery.

Like other Fujifilm cameras of its time, it has drop-in loading and film pre-winding. It also has an unusual feature for a compact camera: there’s a manual focus mode where you can set the distance of your subject.

So far, I have not been tempted to buy one, only because I have read some reports about the reliability of this camera. Out of all the cameras on this list, this is the one I’ve heard people have the most issues with.

Released in 2007, the Fujifilm Klasse S and W cameras are the newest premium point and shoot cameras money can buy. They originally went on sale for 89,000 yen, which was about $725 USD. Once again, the Klasse cameras were a Japan-only release, but thankfully, the team at Fujifilm put the menu and controls in English. 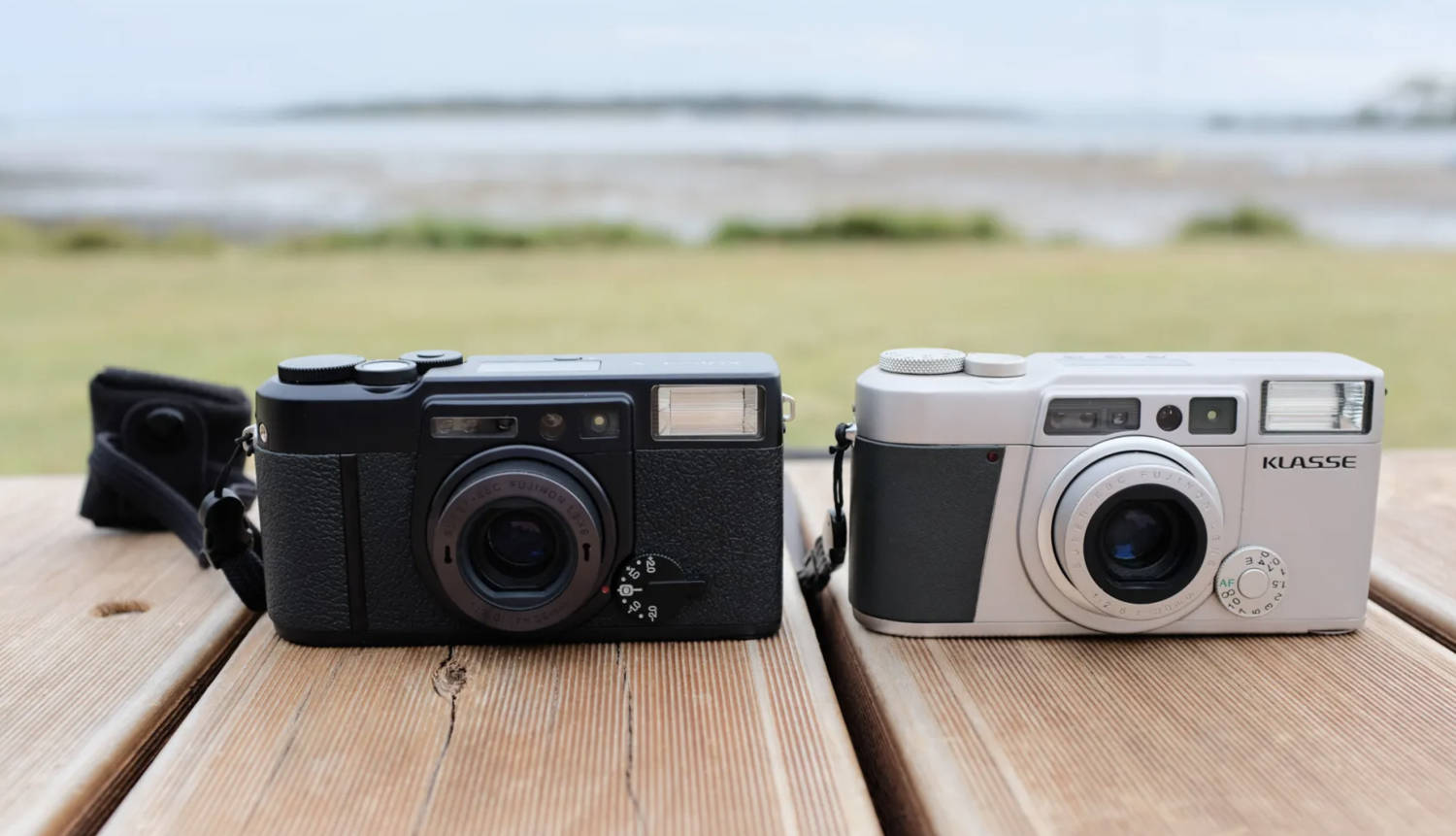 The Klasse cameras sport a super Super EBC (electron beam coating) Fujinon lens in two flavors: the standard (S) 38mm focal length and the wide (W) 28mm lens. As you’d expect with a premium point and shoot, you can shoot in aperture priority mode and also dial in exposure compensation.

One advantage the Klasse cameras have over competitors, like the Contax T3, is the ease with which you can change settings. Exposure compensation is handled by a small lever on the front of the camera, for example, much better than having to dig through menus.

If you like shooting color transparency (slide) film, this is a fantastic camera. Fujifilm specifically developed the Klasse cameras around this capability, as the cameras have excellent metering.

Last but not least, a forgotten camera from the early 2000s when digital was on the march. The Fujifilm Silvi F2.8 was a mid-range zoom camera launched in 2003.

The Silvi featured a very handy super EBC Fujinon 24-50mm zoom lens, which is a little wider than many other zoom lenses in this type of camera. There was a good reason for this wider zoom, as you’ll soon find out. 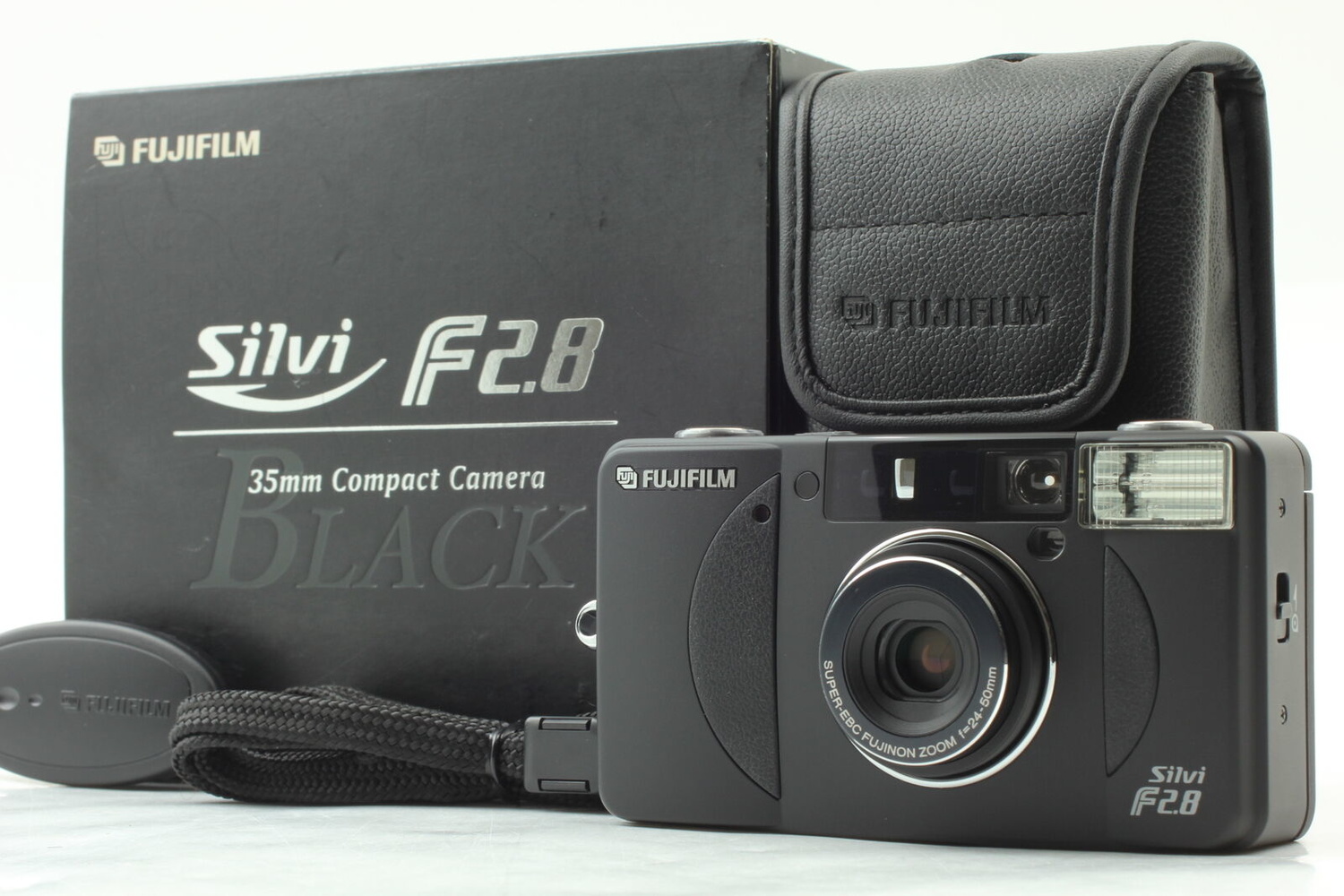 What’s cool about this camera is that is has dual shutter release buttons: one on the left and one on the right. The camera was, of course, released at the dawn of the selfie era, so Fujifilm was trying to make it as easy for you as possible to take photos of yourself. The camera had a self-portrait mode with an indicator to help you compose and frame selfies.

Although f/2.8 is on the front of the camera, that is perhaps a little misleading, as f/2.8 was only achievable at the 24mm end of the range. The black version of the camera was available only in Japan, and like the Natura Black, it had an added bonus feature: the ability to add exposure compensation of up to +/- 2EV.

That’s it for my roundup of five point and shoot cameras Fujifilm should bring back. Which ones did I miss? Tell me in the comments below.